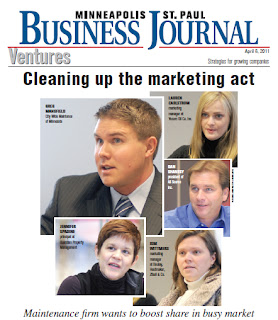 A Bloomington firm that manages facilities services in a cluttered market is looking to clean up its message. City Wide Maintenance of Minnesota President Greg Mansfield opened the business in 2006 with his wife, Kelly Mansfield, and father, Dick Mansfield. It now manages cleaning and maintenance contracts at more than 125 properties.

City Wide, which has about a dozen employees including sales staff and some skilled laborers, brought in more than $3 million last year.

About three-quarters of the cash flow comes from repetitive service contracts for regular cleaning, lawn care and snow removal. The rest comes from as-needed services, such as window washing and carpet cleaning. The company is projecting revenue between $3 million and $4 million in 2011.

“We want to be a very specialized niche,” Mansfield said. “We want to be the No. 1 provider of property facility services for mid-range commercial property in town.”

Mansfield said the company’s market share is less than 1 percent now, but he wants to grow that to 3 percent by targeting 50,000- to 100,000-square-foot clients that don’t have facility managers.

“We’re looking for people that really need to take care of their property and need somebody to be there to help manage it and make sure the people are doing the job right,” he said.

The company is structured heavily toward management, sales and site managers, who oversee the contractors that carry out the facility work.

“We always have on-site management available, just like a general contractor would if they were building you a home,” Mansfield said.

The recession helped business, which he said increased by nearly 45 percent last year. Looking to pinch pennies, companies reduced their maintenance budgets and outsourced the work to firms like City Wide.

The sour economy also has increased City Wide’s competition. The industry doesn’t cost much to get into, which many former facility managers and others had to do as unemployment grew. They’re calling on the same clients — existing and potential — as City Wide, but often offering lower rates.

“Once we get an opportunity, almost 50 percent of the time we’re able to secure the business,” Mansfield said. “But how do we generate the leads when there’s thousands of snow removal and cleaning companies in town that are calling on folks all the time?”

City Wide will get the business by demonstrating the difference between it and competitors, said a panel of industry veterans and business experts convened by the Minneapolis/St. Paul Business Journal to help the company spruce up its marketing efforts.

“We went and completely rebranded ourselves two years ago. That’s had some effect, but it’s limited in its ability to generate leads,” Mansfield said.

City Wide already has an e-mail marketing program in place that registers what Mansfield said are above-industry average click-through rates, or good numbers of e-mail recipients visiting the company’s website by clicking on links in the e-mails.

Successful email campaigns ignore the subscribers who sign up but don’t follow up, said Kim Wittmers, who has coordinated these kinds of efforts as marketing manager for Eden Prairie accounting firm Boulay, Heutmaker, Zibell & Co.

She said the recipients who never look at the messages they’re sent often delete them right away.
“You’re going to waste a lot of time and energy trying to get those other companies to pay attention,” Wittmers said.

Wittmers said it’s counter intuitive but proven that the program can be made more effective by removing inactive subscribers. She recommended culling the e-mail addresses that haven’t actively read the e-mails to focus on the “low-hanging fruit,” or most promising leads.

“You’re going to get better click-through rates and it’ll save you from getting dinged as spam,” she said.
Minnetonka-based building services provider and supplier All Source Inc. President Dan Shanesy said City Wide should stick to its pricing and resist the urge to race to the bottom. Property managers need to understand that there is a price floor to these services, despite what low-ballers might say.

“If they’re just continually choosing the low number, they’re setting themselves up to fail,” he said.
Shanesy said every first-time service is an audition for what could be a long business relationship.

“You want it to be priced right, you want them to be happy and then you have a door open,” Shanesy said.
He also said City Wide should develop a formal reward program to pay and officially recognize employees throughout the operation for delivering leads.

“Everyone needs to be on the ‘Get New Business’ wagon,” Shanesy said. “Everybody likes money.”
The panelists suggested sponsoring events for manufacturing and medical clients, which would be receptive to the company’s specialized experience if it can demonstrate its expertise.

Jennifer Spadine, principal at New Brighton-based Guardian Property Management, said City Wide can make a name for itself by showing off its familiarity with facility regulations specific to those industries.
“Look for that niche and focus on that niche,” she said.

Lauren Carlstrom, marketing manager for St. Paul-based Yocum Oil Co. Inc., a petroleum-services and supply company, said City Wide could feature in e-mails and on the company’s website satisfied customers to demonstrate its wide breadth of services and industry specialization.

Wittmers said that would not just show what the company can do, but how well it can do it in the words of current, happy customers.

“Clients are more than happy to do that for their vendors if they’re happy with them,” she said.
Effective marketing requires specific targets, a thought-out strategy and a healthy dose of self-awareness, Carlstrom said.

“Who you’re contacting, who you’re following up with and the messaging are the most important things in a campaign,” she said. “Know very clearly what separates you from every other company.”

~Your City Wide Team
Posted by City Wide Maintenance of Minnesota at 10:02 AM